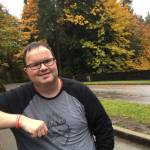 Peter “Pete” Sanchez (06’) is a Staff Writer and Social Media Coordinator at The Catholic Star Herald. In 2017 he launched the podcast Talking Catholic, which interviews Catholics leaders in the Diocese of Camden.

Since I’m interested in Catholicism and writing, I decided to talk to Pete about his work:

Kevin: You said you viewed telling other people’s stories as a “calling.” What did you mean?

Pete: I truly believe God has given everyone gifts, and I am thankful that he has given me the gift of being able to share other people’s stories through writing, about how God is working in their lives, be it in their parish, school, home, or community.  It’s a calling that I feel I should use this gift, to not only give God glory, but make known his goodness.  God has blessed me with the ability to write, and I have a responsibility to build up His kingdom here.

Kevin: The Talking Catholic podcast has a segment called “Talking Saints,” which simply tells stories from the lives of Catholic saints. Why do you do this?

Pete: My entire life, it seems, I’ve been inspired by the lives of the saints – Augustine, John Paul II, Teresa of Calcutta, to name a few. Their time here on Earth is a blueprint for how all of us should live out our daily lives. At the beginning of every show, my co-host, Laurie Power and I start off with a quote from Pope Francis: “To be a Saint is not a privilege for the few, but a vocation for everyone.”  We began this monthly program not just to show saints’ holiness, but their humanity and struggles; none of them were perfect.  God’s love and grace, however, transformed these men and women into models we can follow. They demonstrate that sainthood is possible for all of us.

Kevin: The Herald‘s intended audience is Catholics in the Diocese of Camden, which includes priests and laypeople of various ethnicities and levels of involvement. Writing for such a range of people, does your audience ever surprise you?

Pete: Honestly, I’m always surprised when I hear from my editor that one of my stories was picked up and shared by a national Catholic publication. It doesn’t happen often. On most days, I view my audience as the Catholic Community of South Jersey.  When I hear that one of my stories was read by someone in another state, it’s surprising and humbling. When it happens, it just reinforces the responsibility I have in my profession, as a Catholic who happens to be a journalist, to tell the truth.

Pete: In my office, I have artwork of Saint Francis de Sales, patron saint of writers and the Catholic press. In the 16th and 17th centuries, as a priest in Geneva, Switzerland, he would share the faith by writing it down and slipping it under people’s doors. I’m trying to do the same; get the Gospel message out to as many as possible.

You can find Pete’s work at the links below:

Please click on this link to view and enjoy the 2020 addition of our literary magazine, The Avenue.

We hope you enjoy reading it – share it with a friend! 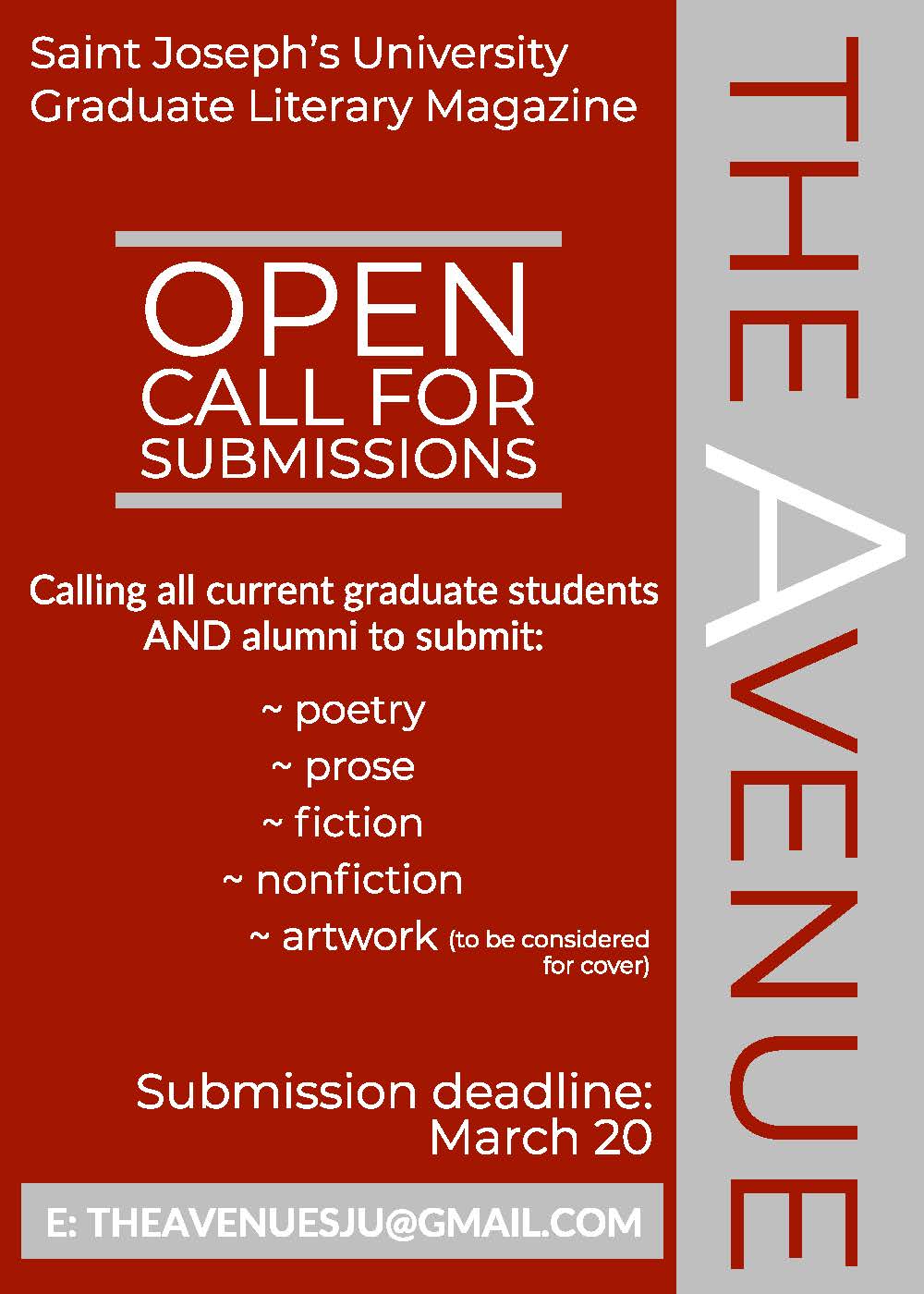 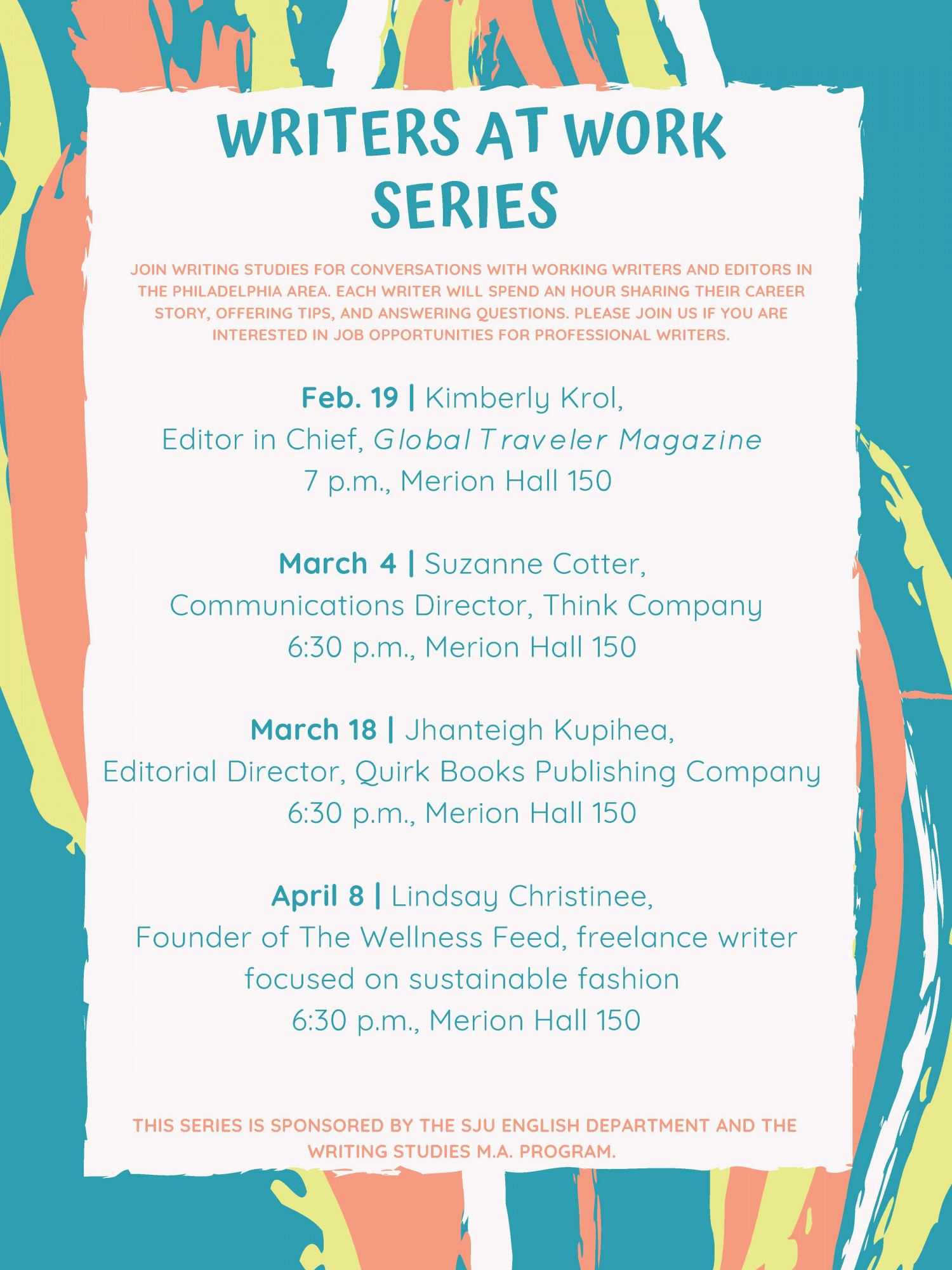 Please mark your calendars for this free event!

SJU alum Krisann Janowitz and writer Bud Smith will be reading, and you will have the opportunity to share some of your work – come out for a celebration of creativity! 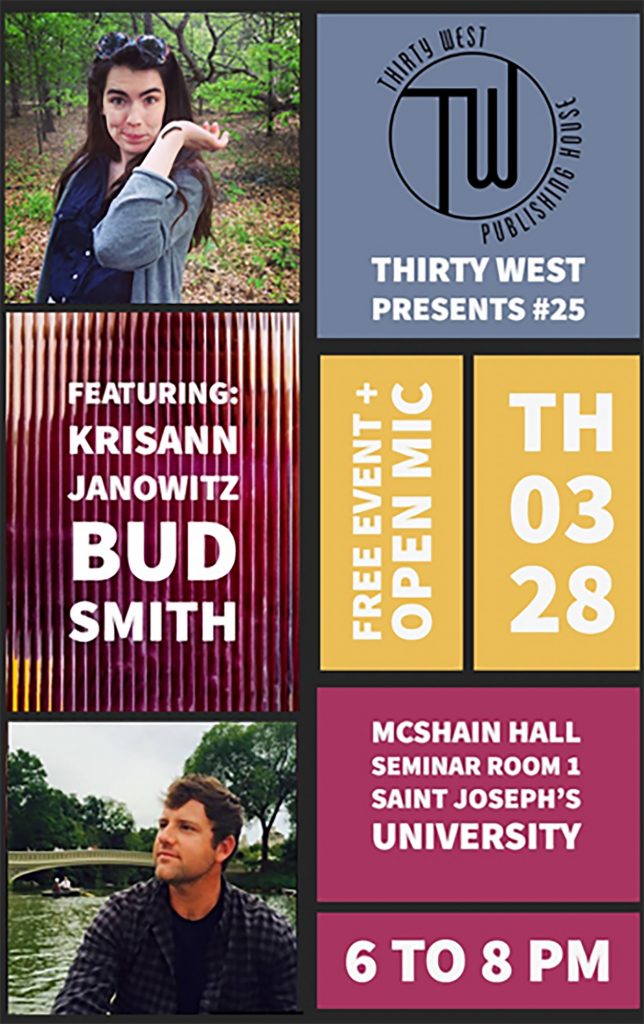