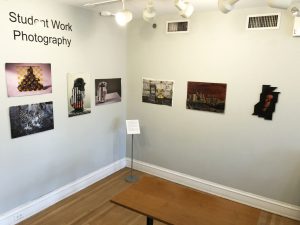 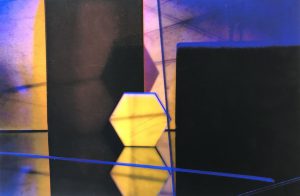 This exhibit displays student work from three different photography courses: Digital Photo I, Constructed Digital Image, and Commercial Photography. These works are created by art majors and minors, as well as by students who major in disciplines other than art. Representing all skill levels and academic backgrounds, these compositions display the students’ hard work and personal artistry. The variety of the work these students have produced is a representation of the diversity of the students’ approaches. 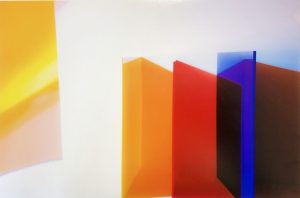 Digital Photo I
This course is designed to teach students how to “see”. Today, anyone can take a photo, but it takes a developed eye to see what is worth photographing. After discussing the fundamental principles of design and the basics of studio photography, students were tasked with using their new skills to create a digital photo image of an abstracted 2D image.

Noah Caruso, a junior communications major, used two angular pieces of foam core and colored plastic discs and played with light and shadow until he took a photograph that emulated his original muse, the geometric and abstract shapes commonly used in commercial marketing in the ‘80s and ‘90s.

Commercial Photography
Seniors Christine Torrey and Alexander Gonzalez worked as a team to create two images. The assignment was to photograph an object, in their case an apple, without the object being the foremost aspect of the photograph. Maintaining a pleasing, subverted aesthetic, the students rose to the challenge by creating mood with soft, warm lighting and pieces of classic Americana, such as a baseball glove and an American flag. Torrey and Gonzalez were both inspired by classic Americana and keepsakes one might find in their grandparents’ house. 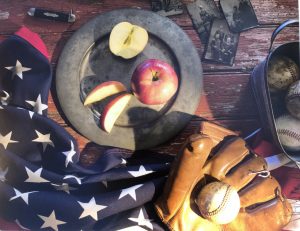 The works from Constructed Digital Image are more 3-dimensional than others. Students took digital images and printed them on canvas or metal or adhered them to non-traditional surfaces, such as wood or glass. Senior Marina Wilson was inspired by her research on animal testing. She comments on the pervasiveness of the cruel practices by photographing animals commonly used in lab testing and weaving the prints into prints of the products the animals were tested for. 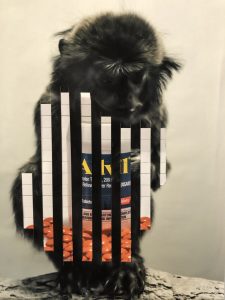 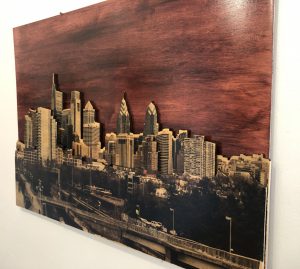