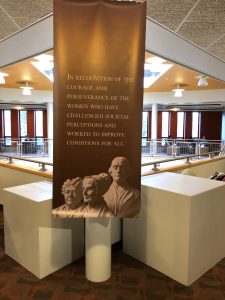 PERSISTENCE presents a series of commemorative medals in recognition of the courage and perseverance of women who have challenged societal perceptions and worked to improve conditions for all.  They are intended to familiarize and instruct, lest we forget the women that have forged a path to give us voice today. 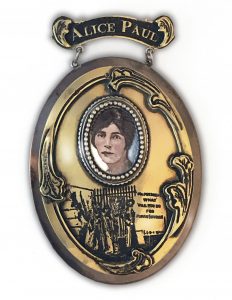 Alice Paul 1885-1977 American Suffragist, Feminist and Women’s Rights Activist, one of the main leaders of the campaign for the 19th Amendment to the US Constitution and author of the Equal Rights Amendment. 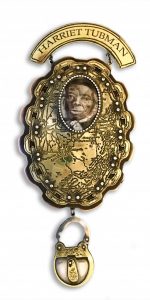 HARRIET TUBMAN Perhaps the best known conduct of the Underground Railroad, Harriet Tubman made 19 trips into the south over a 10 year period and escorted over 300 slaves to freedom.

Mana Hewitt is an artist living and working in South Carolina.  Having a father that was in the military and a diplomat, throughout her life she has lived in various places throughout the U.S. and England.  Inspired by her mother, Hewitt always knew that she wanted to study art or music.  Hewitt originally wanted to study costume design, but when it wasn’t offered at the University of South Carolina, she had to change paths.  She finished with a MFA in ceramics. For Hewitt, her love of ceramics was as much about painting the clay as it was forming the clay.  Hewitt has been teaching for 41 years, first at Columbia College in Chicago and for the past 28 years at her alma mater, the University of South Carolina.

Hewitt was inspired to create “Persistence” after the election of President Trump. Within her collection of medals, Hewitt currently features 65 different women, with an end goal of 100.  The women she chose were very influential during their time, and have forged the path for women today.  She starts each piece on Adobe Illustrator, designing them in black and white and then using copper nitrate and electricity she transfers the image and text etching it into the metal. Once the metal portion is complete, she creates portrait out of porcelain enamel.  The powered glass is carefully placed and then fired to fuse the material together.

Virginia Woodhull is Hewitt’s favorite piece. Woodhull was the first woman to run for president in the 19th century. She ran before women even had the ability to vote! This piece is different from the others because it contains a lock of hair.  A popular trend during the 19th century, when loved ones went away to war, was to take a piece of their hair, braid it, and wear it as a piece of jewelry. 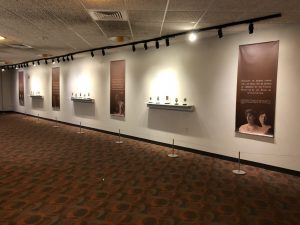