ARTIST TALK CANCELLED
Unfortunately, because of the Eagles SuperBowl parade, the University is suspending operations on 2/8 and we are not able to reschedule the artist talk. 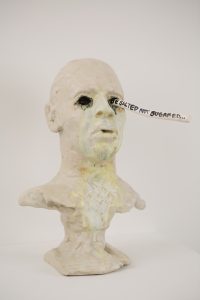 In Wishful Thinking Andrew Cornell Robinson explores how humans create meaning. These works, primarily ceramics and photography, defy traditional ideas of what objects of worship should look like, while upholding their original function.

Living and working in New York City at the time of the 9/11 terrorism attacks, Robinson took particular notice of the way the people of Manhattan mourned their dead. Specifically, Robinson fondly recalls witnessing sanitation workers fiddling with some flowers, candles, and missing persons posters placed along a bridge. A concerned woman asked if the men were taking down the objects, then realized they were covering them with plastic to protect them. This exchange was proof that the small shrines erected in memory of the victims were important to not only the people who put them there, but to the entire community. This poses the question: how do people create meaning from objects?

In answering this question Robinson also looks back to his childhood in New Jersey, where his grandparents housed “curiosity cabinets” from which he could choose an object and hear a fantastic story of its origin. His grandparents invented these stories, but they were meaningful to young Robinson nonetheless.

These moments of personal history expanded to community and then world history for the artist, prompting him to ask Who and what is worshipped in the rest of the world? One of the artist’s reasons for creating these works was to explore who is glorified and who is forgotten, and why.  For example, the main inspirations for Rebel Heart is the story of the Death of the Marat. When Jean-Paul Marat was fatally stabbed by Charlotte Corday in 1793, he became one of the most powerful martyrs of the French Revolution. After his death, Marat’s organs were removed and placed in elaborate reliquary jars for worship after his murder.

The goal of these works is to prompt viewers to question what we worship, and, more importantly, how we worship. In speaking about this exhibition, Robinson described it as “kind of a riff on altarpieces.” This series of modern shrines and reliquaries emphasize and redefine the physicality of worship. 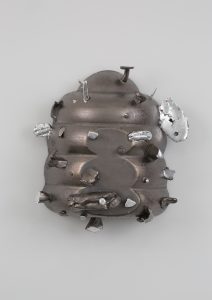 Andrew Cornell Robinson has developed an intuitive and socially engaged approach to the production of interdisciplinary art with a particular interest in bridging art, design and craft with design strategies and methodologies. Robinson creates ceramic, sculpture and mixed media objects and images with a rich attention to materiality. He begins most projects with research that is often historical in nature and driven by a fictionalized character derived from design personae; a methodology used by industrial designers. Leveraging this device enables him to reexamine memory through the production of images and artifacts that tell a revisionist history, examining coded languages and mistranslations. His recent work is often focused on the queer and peculiar within the context of forms that include reliquaries and memento mori artifacts. In carefully researching and creating rich narratives and personae represented by a network of images and objects, he aims to engage the ways we understand historical memory and our place in it.

Hidden narratives have always been important to Robinson.[*] Signs and symbols, colors and materials may all convey meaning from the spiritual to the profane. Robinson’s latest project translates his interest in revisionist histories and is partly a meditation upon the discord within American culture and politics. Expressed through a series of secular shrines, reliquaries, artifacts and images the project began with an examination and reinterpretation of the life and death of the French revolutionary Jean-Paul Marat. When Charlotte Corday plunged her knife into the heart of Marat in July of 1793, she created one of the French Revolution’s most powerful martyr heroes. His body and memory were elevated into a ceremonial pantheon. His heart was removed and placed into a makeshift reliquary–a bejeweled urn that had once belonged to the deposed French monarchy. The reliquary served as a focal point for public ceremony and devotion. The cult of the Sacred Heart (Sacré-Coeur de Jean-Paul Marat) derived from Catholic rituals and idolization became a visual and formal sign that Robinson has abstracted and reinterpreted through a grotto like form in ceramic, glass and mixed media; as well as a series of shrine like tableau in a contemporary exploration of the memento mori. Translating stories through fragmentation and layering result in a collection of signs and artifacts that act like a rebus open to interpretation.

Born in Camden, NJ, he studied ceramics and sculpture prior to completing his MFA at the School of Visual Arts in New York City where he studied with Thomas Lanigan-Schmidt, and worked with painter Frank Moore, et al. He received an Albee fellowship residency and was a visiting artist in Port Au Prince, Haiti and at the Agastya Foundation, in Bangalore, India. His work has been presented throughout the world with the Kustera Gallery, David & Schweitzer Contemporary, Joyce Goldstein Gallery, Christopher Stout Gallery, Baltimore Contemporary Museum, Bruce Museum, Ross Art Museum, and the United Kingdom Crafts Council. He lives and works in New York City and is a member of the faculty at Greenwich House Pottery and Parsons School of Design.

Robinson’s interest in hidden narratives and coded languages spans many topics that include cultural bias, the misinterpretation or obfuscation of culture and identity and simply mistranslation. For example, “Le Livre des Sauvages” in the Bibliotheque de l’Arsenal in Paris is of particular interest to him. The work was the subject of an 1860 study by Christian Abbe Em Domenech, a missionary to North America, who discovered a document covered in cryptic pictograms and glyphs, which he assumed was created by an indigenous person of the American plains. Domenech’s theory of its provenance has been in question by several German critics, who point out that many of the glyphs are characters comprising German words written in clumsy handwriting. Contemporary opinion of Le Livre Des Sauvages is that its bizarre pictures and odd text were merely the doodling of a German-speaking child living on the American plains.

Another example of a coded language that interests Robinson, is Polari, an innuendo fueled English slang language used primarily (although not exclusively) by gay men in the United Kingdom between the 1920’s and the 1970’s although it’s history and etymology can be traced further into the past. It fell out of use after the partial decriminalization of homosexuality in England and Wales in 1967. This ‘lost language of gay men’ served simultaneously as disguise and identification, when mere existence in the United Kingdom and beyond was punishable with imprisonment and public disgrace. Polari was a form of resistance, a way of queering language, and the expression of a shared culture and identity. Transforming craft materials, artifacts and narratives by speaking through codes and abstraction underlines some of the themes within Robinson’s work. 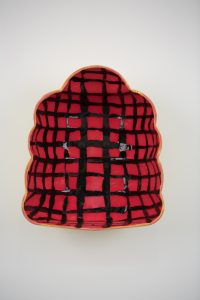