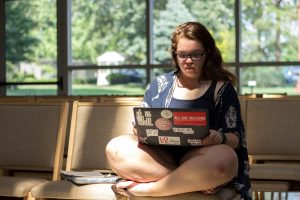 Breen is particularly interested in the balance writers strike between their individual experience and connecting to an audience through universal themes.

Erin Breen ’19 does not hesitate when asked about the goal of her Summer Scholars project: “I want to publish a book,” she says.

A veteran of the program, Breen is writing a series of creative nonfiction essays this summer that explore the intersection of spirituality and the literary. As an English and theology major, she finds her faith comes into everything she does — but especially in writing.

“Creative nonfiction writers — essayists, memoirists — seek to tell true stories that communicate the abstract in tangible ways that allow for better self-understanding,” says Breen, of Glenside, Pennsylvania. “Because of the individualism of spiritual development and the fluidity of this medium, the two disciplines blend and interconnect.”

To inspire her creative energy, Breen is reading a number of spiritual creative nonfiction authors, as well as experts outside the genre, such as C.S. Lewis, Pádaig ó Tuama and Gillian Flynn, to learn how writers utilize literary techniques to document their faith journeys. She says she is particularly interested in the balance writers strike between their individual experience and connecting to an audience through universal themes.

“What are the universal elements of spirituality that can be explored in personal writing, in creative nonfiction, and what techniques and styles do so?” asks Breen, who is working under the mentorship of Jenny Spinner, Ph.D., associate professor of English and director of the Writing Center at SJU. Breen’s project was born out of Spinner’s undergraduate English course in creative nonfiction.

“Dr. Spinner’s class taught me how to write about the personal,” she continues. “Don’t bring anything to class if you’re not ready to make art out of it.”

This summer, Breen also strives to develop her own literary voice — in her literary essays, as well as in journalism. She flexed her writing and reporting skills in South Africa with Saint Joseph’s summer journalism program.

Under the supervision of Shenid Bhayroo, Ph.D., assistant professor of English, and Spinner, the cohort of 8 budding journalists researched, developed and reported on interesting stories throughout Johannesburg, Cape Town, Rosendal and Pilanesberg, and chronicled their storytelling in The Hawk. Breen interviewed refugees receiving support from the Jesuit Refugee Services in Johannesburg and Gail Millard, owner of the Bounty Hunters Charity Shop, who rescues stray cats.

“A writers’ work can be so insular at times, especially the kind of spiritual writing that Erin is trying to accomplish in her essays,” says Spinner. “The South Africa trip opened up a new space for her — for all of us — and allowed her to re-examine herself, her thinking, her writing, in a way that she would not have otherwise done.”