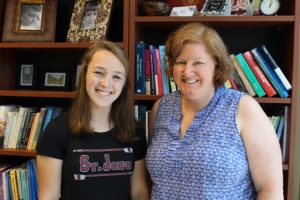 We know that attention to gender norms start influencing children at a very young age.  Adults often assign colors schemes like pink bedrooms for girls or blue bedrooms for boys, and little boys get toy trucks while girls get baby dolls. But do those norms shape children’s judgments on their peers’ behavior? That’s the question that Summer Scholar Amelia Martinie ’19 is asking as she focuses on her project, “Gender Stereotypes and Their Effect on Children’s Potentials.”

“I chose this topic because I wanted to use research methods to explore peer group interactions as well as gender differences in perception,” says Martinie. “I’ve been interested in conducting research since taking the Research Methods class, so it was a good fit.”

A psychology major with a Spanish minor, Martinie will interview children ages eight and up about how they think about moral and conventional norms in theoretical peer-group interactions at her hometown YMCA in Jennersville, Pennsylvania. She will read stories to them and then ask about certain characters’ actions and how the children feel the characters should act, and why. She hopes to understand how deeply children consider gender norms and whether or not there are gender differences in their reactions.

Martinie says she discovered this line of research after taking the developmental psychology and research methods class with her Summer Scholars mentor, Clare Conry-Murray, Ph.D., an assistant professor of psychology. Conry-Murray has conducted research based on gendered toys and their effect on children’s perception of gender and its role in peer-interactions. She found that children do not recognize unequal opportunities available to boys and girls.

“Amelia will investigate how group dynamics affect children’s reasoning about challenging group norms,” says Conry-Murray. “If she is able to find support for her hypothesis, it will support the benefits of diversity, especially in children.”

Martinie is interested in continuing her research in SJU’s five-year M.S. program in psychology. She hopes to pursue a career as an experimental psychologist.

“The Summer Scholars program is giving me the chance to conduct my own research in the field of psychology,” says Martinie. “This is my first time doing research on my own so I’m very grateful for this opportunity.”

Martinie is a varsity rower, and is a member of Psi Chi, the Psychology Honors Society. She has also earned a spot on the Atlantic 10 Commissioner’s Honor Roll all four semesters that she has attended SJU.