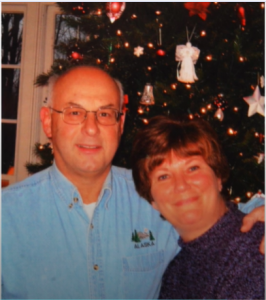 Bread baking has been a part of the Amoroso family for more than 100 years, and for Dan Amoroso ’70, being part of the family business taught him a lot about hard work and commitment. But when it came to steering his life in the right direction, Amoroso credits two particular influences: his alma mater and his beloved late wife, Edwina.

“I believe in Saint Joseph’s University,” he says. “Whenever I came off the tracks, it was Saint Joe’s or Edwina who put me back on track. Between the two of them, they made me what I am today.”

These significant relationships served as the inspiration for Amoroso to create the Edwina Amoroso Scholarship Fund at Saint Joseph’s, honoring his wife’s memory and her curiosity and affinity for learning. Edwina, who graduated from Bishop Neumann Business School and began working at the age of 16, never had the opportunity to attend college, a place Amoroso knew she would have flourished.

“If anyone deserved to go to college, it was her,” he says.

Amoroso saw firsthand Edwina’s great interest in science — something he wishes she had an opportunity to explore. The scholarship, which propels women to excel in science, technology, engineering and mathematics (STEM) fields, provides a unique opportunity to honor two incredible forces in his life, he says.

In addition to supporting the University’s commitment to preparing students for professional success in competitive and diverse workplaces, Amoroso’s foresight emphasizes Jesuit ideals and the importance of paying it forward. His gift, timed to celebrate his 50th Golden Hawks class reunion, enabled him to become a member of the Magis Society — recognizing leaders who commit to do more to advance the University’s mission.

“Having a degree doesn’t make you smart — Edwina had it, with or without a diploma,” says Amoroso. “But, my hope is that this scholarship provides someone the opportunity to receive the education she wasn’t afforded.”

To learn more about how to become a member of the Magis Society, please contact Kathy Barth, Assistant Vice President, Donor Relations and Events at kbarth@sju.edu or 610-660-2307.