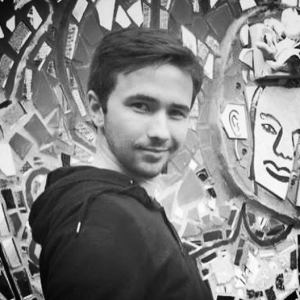 Favorite punctuation mark?
&  (One day I’ll figure out how to draw it.)

Oxford comma or no?
Absolutely, surely, and always.

Favorite music to write to?
Tons of movie scores & soundtracks. My favorite is Jurassic Park.


SJU Writes: What kinds of writing are you focusing on right now?
TS: Colin [Mallee ‘17, co-head writer of Followed By A Bear Student Theater Company] and I are facilitating a two-act play, which we’re working on with the Followed By A Bear writing team, and our goal is to have it done by the end of the semester. I’m also in a television production class, and we’re writing and producing a TV show which will be finished by the end of the semester. Besides that, sometimes I write other short skits which I hope to film one day.

SJU Writes: What, in your opinion, is the best thing you’ve written in your life?
TS: I really like the scene I wrote for the forthcoming Night of Scenes for Followed By A Bear. It’s about two guys who are on top of a building about to jump, but they don’t know that the other is there at the same time. It’s an awkward situation that delves into black comedy as the piece gets darker and more emotional toward the end; I really liked how I handled it.

SJU Writes: How did you come up with that idea?
TS: Honestly, we had a due date for our scenes, so the night before I was just brainstorming what could make a good dramatic situation. And I thought, “Suicide’s pretty up there. How can I deconstruct that and look at it from a different angle to make it not as serious?”

SJU Writes: What is the earliest thing you remember writing?
TS: When I was in fourth grade, I really wanted to write and direct movies, so me and my buddy had this whole character that we created. He was a superhero with a hook for a hand, but the hand was a candy cane. It was the craziest thing! It was probably a fifty-page screenplay on Microsoft Word.

SJU Writes: When you’re confronted with a writing task, how do you approach it off the bat?
TS: When it comes to writing a scene or any kind of fiction, I approach it by looking at other writing that inspires me – movies that I like, fiction with similar themes. And I ask, what did and didn’t work about them? Especially finding what didn’t work. That helps a lot.

SJU Write: Do you write with the advice of a particular person in mind?
TS: Not a particular person, but other playwrights, authors, and filmmakers whose works I’ve read or seen. No good writing is done alone. You have to get as much input and do as much research as possible and see what does and doesn’t work about drama and fiction. So, I just think back to my favorite authors and what they believed and wrote about.

SJU Writes: How do you feel when you’ve completed a writing project?
TS: I tend to feel pretty proud of it. I’ll want to show it to friends, just to say, “Hey, can you give me feedback?” Even though it’s done I’ll still want to see whether or not people like it. For the most part, I’ll be proud of it, then come back to it two years later and think, “What did I just write?” 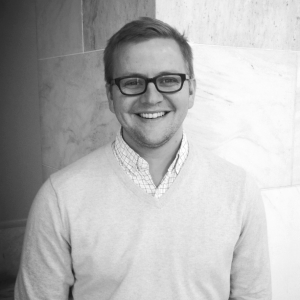 What are you reading now?
“If Nuns Ruled the World” by Jo Piazza.

SJU Writes: How long does it usually take you to complete an assignment?
SC: I finish writing projects in my day-to-day on the campaign trail. The timeframe of a campaign is pretty darn fast, so you have to have a stump speech and work from that. Typically, I edit other people’s writing and write directly for Katie. When I have something to start, I’ll show it to her and bring in her perspective and personality.  We like to start with a couple facts and go from there, so if we’re talking about college debt, we start with the average debt for a Pennsylvania college graduate, for example.

SJU Writes: What is your favorite aspect of your various writing processes? What is fun for you?
SC: There’s this saying that all politics is local. My favorite part of writing is when we’re able to find a local issue that really matters to people, and hitting that well. Katie actually met an 84 year old grandmother on the trail, whose daughter and  granddaughter had student loan debt. We didn’t expect to talk to her about student loans, but sure enough that’s what we talked about. So Katie opened her speech that day with that woman’s story. That’s what we want to doㅡto find a real life example to illustrate issues in a relatable way. Anyone can rattle off facts. It’s important to find the real people behind the facts.

SJU Writes: What is the hardest part about writing?
SC: Particularly in politics, you never want to be “out of touch.”  At the end of the day, what we’re doing is talking to people about their world. The difficult thing is staying aware. If Katie’s in Pittsburgh and something important happened, we want to get it in our remarks.When she’s ready to get on stage, I’ll quickly check Twitter.If there’s breaking news, I’ll grab her and say “we need to change this section of your speech.” You never want to just say “it’s great to be in Scranton, it’s great to be in Philadelphia!”

SJU Writes: What is the best thing you’ve ever written?
SC: Well it certainly wasn’t in college! Oddly enough, it was a eulogy. I was working for Senator Patty Murray of Washington, when the former Speaker of the House Tom Foley, also from Washington, passed away. Senator Murray went to the funeral. I did a lot of research and ended up knowing a lot about him. I talked to Senator Murray to get her input and stories about him. He had been in Congress for a long time when she first entered the Senate and he actually took her in and showed her around. The story she told me was the story I used to end the whole thing.

SJU Writes: Does anyone’s advice echo in your head?
SC: As far as teachers, Dr. [Jenny] Spinner was too good to me. Also Fr. [Patrick] Samway, a Jesuit. I think more than anything else, I try to copy my favorite writers. I’ve always loved reading the newspaper, even as a kid, and I still love reading through to see all the different ways people make their arguments. If I see  a really good argument, I’ll try to remember how they made it.