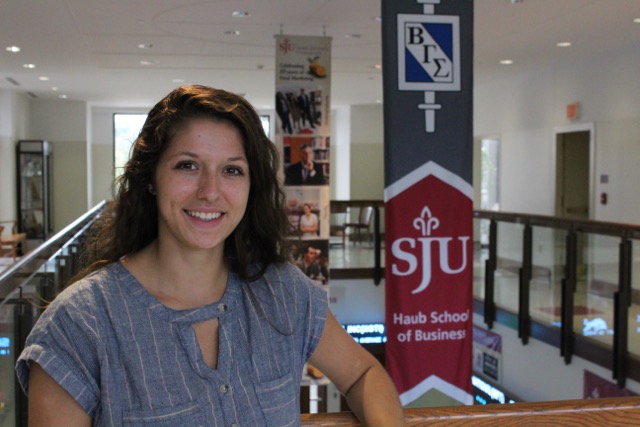 When a politician says or does something you don’t like; what do you do? You rush to your favorite social media site armed with your passion and wit, of course! Perhaps you may take a moment before posting: Karleigh Lopez Summer Scholar project, which studies humor and incivility on mass media and their effect on society, might change your mind.

“The public is concerned about social behavior on online platforms,” says Lopez. “Increased political polarization is often associated with incivility, but recent research has shown the problem may be more of a widespread characteristic of our society.”

Lopez, a communication studies major from Shamong, New Jersey, is exploring the role of on social media as a response to significant newsworthy events and the extent to which it is marked by politeness or discourtesy. More specifically, she is exploring the reaction across the political spectrum to President Trump’s (June 1 2017) announcement that the United States’ would withdraw from the Paris Agreement on climate change.

From about two weeks since the date that it was announced, Lopez and her mentor began to study tweets, using programs like TAGS (Twitter Analytics Google Sheets), Tableau, and NVivo to search positive and negative key terms, such as “amazing,” or “poor.” In addition to looking at reactions from everyday people, Lopez scans celebrity responses and tallies retweets from new sources. She analyzes whether the posts use humor that is merely humorous vs. humor that crossed the line into incivility.

Lopez met her mentor,Ken Weidner, Ph.D., assistant professor of management, while taking LEO 150, Serious Comedy and Social Justice. Her interest in the topic led her to observe the effect of mass media on the political climate in the past year. From there, she created her Summer Scholars project.

“This kind of scholarship is exploratory, so there are many challenges as there are successes,” says Weidner. “Lopez is not discouraged easily, and her perseverance seems endless.”

Lopez hopes to publish her work in an academic journal, or write an op-ed article on her findings. She says that having an opportunity to read about social media, politics and egoism is helping her to understand the political climate and how modern media affects our way of thinking.

“The whole saying, ‘laughter is the best medicine,’ isn’t even a choice nowadays. Everywhere we turn we see potential political conflict,” says Lopez. “Humor gives power to the individual, and it makes the political climate easier to comprehend.”

Lopez is a member of the Honors program and Phi Sigma Phi Honors Fraternity. She is on the SJU cheerleading teaming and is an opinions writer for the student newspaper, The Hawk.