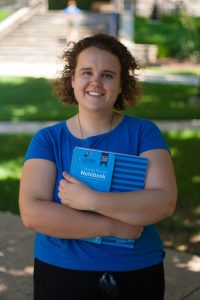 Are you a poet? If you haven’t met Emma Seely ’18, it’s possible that you are and you just haven’t discovered your inner bard yet.

As part of a project for the Summer Scholars Program, Seely, a dual English and psychology major from Parkton, Maryland, is building a collection of poems written by people she meets on the streets of Philadelphia.

Seely guides the writing by asking the poets to think about an object, then gives them several prompts to describe the object: its appearance, how it affects the world, and so on. Each exercise lasts 30 seconds; within five minutes, a new poem is born. She publishes the finished products online at https://poemsofphiladelphia.wordpress.com.

“When I approach people, a lot of them worry about not being able to write a ‘good’ poem,” Seely says. “I want to make the point that anyone can be a poet if they aren’t caught up in the need to write to meet someone else’s criteria for good.”

A longtime fan of the art form, Seely hopes that the projects kick starts a love of poetry in both her spontaneous authors and those who visit the site.

“Sometimes people feel like poetry is inaccessible to them if they don’t have a master’s-level understanding of English,” she says. “These poems prove that an audience can appreciate and relate to the work even if it isn’t necessarily the next Shakespearean sonnet.”

Seely’s mentor, Thomas Coyne, M.F.A., assistant professor of English, agrees about the project’s potential to inspire a love of poetry.

“This project combines the best of what we do here at SJU, blending art and academic pursuit and community engagement,” he says. “It makes a real case that poetry matters, and that language can reshape the way we look at our lives. It is both service and research, and its potential to show people the poetry in their lives is truly exciting.”

When not working on her Summer Scholars project, Seely is a member of three national honor societes: Sigma Tau Delta (English), Psi Chi (psychology) and Alpha Sigma Nu (Jesuit). She participates in weekly service at Covenant House, hosts a radio show on Radio 1851, volunteers in a campus psychology lab and mentors students at SJU’s Writing Center.

Seely says that the hopes the project brings her to a better understanding of the world around her.

“I’m seeing Philadelphia in new and exciting ways,” she says. “I always wonder about the secret lives of the random people I see walking on the street, and now I have an outlet to bring us closer together.”