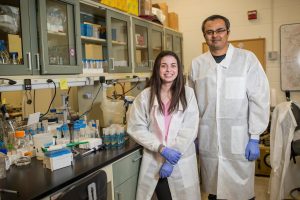 It’s important in college for students to find a place where they can escape and focus. For many, it’s a quiet corner in the library or a residence hall lounge late at night.

For Marisa Egan ’18, it seems that the best place to go after a long day of classwork is the lab.

The junior biology major, mathematics, philosophy and chemistry minor and McNulty Scholar has spent a considerable amount of time during her two years on campus — and two full summers as part of the Summer Scholars Program — in the lab of Shantanu Bhatt, Ph.D., assistant professor of biology, conducting research on the pathogenic bacterium Escherichia albertii.

The bacterium, which is in the same family as E. coli, attacks the intestines, causing diarrheal problems. It is drug resistant, has no vaccine, and largely affects infants in developing countries, though some cases have appeared in adults in Japan and Germany.

“There’s so much we don’t know yet about E. albertii,” Egan explains. “The goal of our research is to understand how it causes sickness by creating mutations in its genome. If we can understand the genes that contribute to its disease causing ability, then someone may be able to one day develop a drug to attack those genes.”

In the summer between her freshman and sophomore years, Egan and Dr. Bhatt became the first research team to successfully create such a mutation in the bacterium since it was identified 25 years ago. Their research was published this year in Biological Procedures Online. Egan was the lead author. Another paper, led by Dr. Bhatt and co-authored by Egan and other researchers, was recently published in Gene & Translational Bioinformatics.

“Marisa is one of the most gifted students to have ever graced my classroom,” Dr. Bhatt says. “Ever since I have known her, she has exhibited uninhibited enthusiasm in learning all that she can from her academic journey. It’s students like her that teach teachers so much and serve as a motivator to go the extra mile for our students.”

Egan enjoys the abundance of time that comes with doing her research as part of the Summer Scholars Program.

“I love immersing myself in the work,” she says. “There are no daily time limits with Summer Scholars. I can come in early and leave late. The entire day can revolve around research.”

Egan credits her parents — both of whom are doctors — with teaching her a love of science.

“I’ve always been interested in topics that were relevant to human health,” she says. “Ultimately, I want to serve humanity through scientific research and teaching.”

Outside the lab, Egan mentors her fellow students by serving in SJU’s Success Center as a supplemental instructor for Biology 101 and teacher’s assistant for organic chemistry lab courses. She is also the scholarship chair for Pi Sigma Phi, a gender-inclusive academic honors fraternity on campus.

“Besides research, my absolute favorite thing to do on campus is to teach,” Egan says. “Working as a supplemental instructor and teachers’ assistant lets me share my passion for science, humanity, and learning with others. I derive so much inspiration from my parents, my peers, my students and my professors, and my life goal is to pass that inspiration on.”