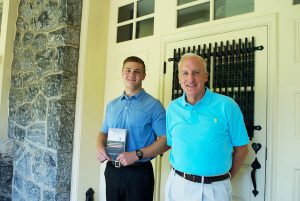 From court to field, sports fans show their appreciation and team spirit in a variety of ways. But Summer Scholar and biology major Brant Edmonds ’17 is channeling his love for sports in a unique manner: He’s looking at brain development in school age football players, and writing about the ethics surrounding young people who play football and might be exposed to practices that could eventually lead to chronic traumatic encephalopathy (CTE), a degenerative brain disorder caused by repeated concussion. His research goal is to write a paper that will provide guidance and protocols that could reduce the likelihood of these young players developing CTE as they mature.

An aspiring physician, Brant read Jeanne Marie Laskas’s (Class of 1980) New York Times bestseller Concussion, and the book served as the catalyst for his project. “After noticing that autopsies of younger players were displaying advanced stages of CTE, I wondered if the disease was beginning much earlier in a player’s career,” says Brant, who adds that he hopes his paper, which will be submitted for publication, promotes awareness of CTE risks among young players and parents.

Organized in six sections, his final work will include background information on CTE, an in-depth medical analysis of the disease, a historical view of CTE in American sports, the educational issues caused by football in elementary and high school players, and an overview of associated ethical issues. He’ll conclude his paper by proposing recommendations and safeguards for children rooted in the suggestions of the American Academy of Pediatrics.

Brant’s SSP mentor Peter Clark, S.J., professor of theology and health services and director of SJU’s Institute of Clinical Bioethics (ICB), where Brant is a senior research fellow, observes him in a different capacity most week days as Brant attends ethics rounds and other bioethics related meetings at Mercy Health System, where Fr. Clark is the staff bioethicist.

“Brant is bright, inquisitive, and relates very well with patients and physicians,” says Fr. Clark. “He examines an ethical issue from all perspectives and then logically evaluates the facts of a case until he reaches a well-reasoned decision. He is an exceptional scholar and person and will make a great physician in the future.”

Earlier this year, Brant, Fr. Clark, Ana Maheshwari, a Mercy medical resident, and three other SJU students — Brendan Gleason, Michael DeMuzio  and Jennifer Schadt — co-authored a paper titled “Pediatric Brain Cancer Tissue Donation: Ask and You Shall Receive,” which was published in the Internet Journal of Pediatrics and Neonatology 18.

The success of the paper helped the ICB develop a formal relationship with the Swifty Foundation in Chicago, a leading funder of pediatric brain cancer research. Both Brant and Fr. Clark look forward to collaborating on various projects with the foundation in the future.

During the academic year, Brant participates in Adventure Club and Hand In Hand. He is an RA for St. Mary’s Hall and also works in the University’s Biodiversity Lab, focusing on animal care. Brant has earned Dean’s List honors and is a member of the National Society of Collegiate Scholars.

Mentor: Peter Clark S.J., professor of theology and health services and director of the Institute of Clinical Bioethics