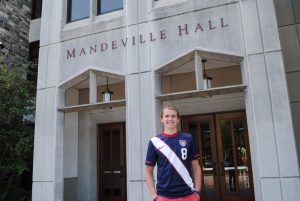 When avid soccer fan and mathematics and computer science major Kevin Shank ’18 learned about the sports marketing minor at SJU, he couldn’t pass it up. Combining his liberal arts degrees with the business-focused minor has allowed him to combine his interests, and inspired him to apply for the summer scholar program. “I wanted to spend my summer doing work that interested me,” he says. “This program gave me the opportunity to create my own project based on my own questions, and search for those answers.”

The questions Kevin decided to raise focus on player contribution in relation to salary. ESPN recently posted an article about salary discrepancy in Major League Soccer. “One interesting fact this article highlights is that two different players in MLS make more per season than the whole roster of 14 different teams,” says Kevin.

“Past scholarly journals have shown through statistics which aspects are most important and strongly correlated with winning teams,” says Kevin. “With that information, and through collecting and organizing the raw data, I will also determine which players are most efficient in terms of salary and predict player/team performances based on recent results.”

“I am extremely impressed with Kevin’s genuine curiosity and work ethic,” says Sheridan. “He is an enthusiastic and smart self-starter, and his project will help to shine light on how Major League Soccer can effectively use data to make strategic roster decisions.”

“I want to enter this field of sports analytics,” he says. “I am hoping that this project will offer a sample of what it is like to analyze Big Data in the sports industry.”

A native of Broomall, Pennsylvania, Kevin is also a member of Saint Joseph’s club Gaelic football team, a leader for the Philadelphia Service Immersion Program, a community partner coordinator for the weekly service site at Our Mother of Sorrows soup kitchen/outreach, an APEX participant and a member of the service fraternity Alpha Phi Omega.