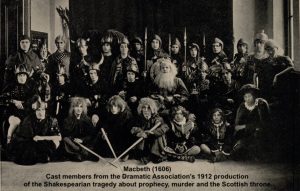 Theatre has played a role in Saint Joseph’s University history since its earliest days in the 1850s.  Students presented recitations and/or dialogues during the commencements.  One of these was “Loyola’s Vigil” given in 1853 by a commercial student, Andrew Jackson.  The following year students presented the period drama “Regulus” about a Roman general taken prisoner in the wars with Carthage.  Unfortunately, the College Catalogues, the source of this information, are only available in the Archives from 1852-1862 before resuming in the 1890s

A reference was made in the 1897-1898 catalogue to the founding of the Saint Joseph’s College Dramatic Association with a listing of its officers and moderator, the Rev. Joseph H. Hann, S.J.  The association members performed Shakespeare’s King John at the Park Theatre in Philadelphia on June 1, 1898.  Not much is known about the play other than its cast of characters, which includes the names of the student actors.

At the start of the 1900s, the Dramatic Association produced a series of Shakespearian plays including Macbeth (1912), Twelfth Night (1913) and King Henry IV (1914).  Gilbert and Sullivan’s satirical operetta The Mikado made it to the stage in 1915.  However, the group’s most successful work was The Passion Play, about the life of Christ, performed in the spring of both 1916 and 1917 at the Metropolitan Opera House in Philadelphia.  The play attracted numerous dignitaries and was seen by a reported 30,000 people.

The Cap & Bells Club formed in 1927 became the successor organization to the Dramatic Association.  Its first annual production was of The Bells at the Penn A.C. Ballroom on the night of February 11, 1928.  After its initial success, the players went on to perform in annual productions and enter a series of one-act play contests. 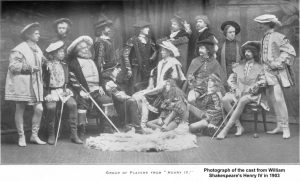 All the World’s a Stage: Theatre at Saint Joseph’s College in the Early 1900’s, a new Archives and Special Collections display is on view in the Gerard Manley Hopkins Special Collections located on the of the 3rd floor of the Post Learning Commons.  It will be available through the end of the spring semester.  Materials used in the exhibit are reproductions of original play programs and period photographs from the College Annual, the Crimson and Grey, the Greatonian Yearbook . 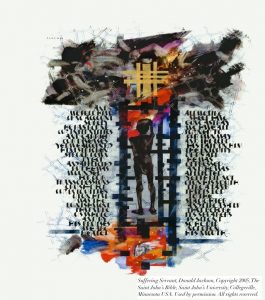 Philip A. Cunningham, Ph.D., Director, Institute for Jewish-Catholic relations, Adam Gregerman, Ph.D., Associate Director of the Institute and Martha Easton, Ph.D., Assistant Professor of Art History will survey some of the stunning new approaches to biblical art in the illuminated contemporary Saint John’s Bible and compare them to traditional illuminations, focusing especially on images of Jews, women, and race.

Please mark your calendars and join us for this informative and engaging presentation.

A light lunch will be served. RSVP to: Christopher Dixon, cdixon@sju.edu

This event is co-sponsored by the Institute for Jewish-Catholic Relations, Post Learning Commons & Drexel Library, Office of VP for Mission, the Art Department, Theology & Religious Studies and Alumni Relations.

A recent chance to re-organize the SJU Archive helped us to organize and label all archival boxes, create a box list and then compose a current finding aid. The Saint Joseph’s University Archives Finding Aid provides an inventory and description of the institutional and organizational records of Saint Joseph’s University dating from 1851-2019.  Records include photographs, correspondence, documents, memorabilia, scrapbooks and yearbooks which document the history of the administrative and academic units and activities of SJU’s administration, faculty, staff and students.

Our Finding Aid gives a context for our collection, which includes University history and Catholic, Jesuit, and local history. Reading the finding aid allows researchers to decide whether our materials can help them in their research. Related materials are also listed.

You can access the Finding Aid from the library homepage under Archives and Special Collections.

As part of American Archives Month, the Gerard Manley Hopkins, S.J. Special Collections will host an Open House! Highlights include:

Summer scholar Collin Petersen, Philosophy ’21, will discuss his research into the university’s collection of Pre-Columbian Pottery. On display during the Open House and afterward is a new exhibit of the pottery curated by Petersen.

lty Scholar Will Discuss Opioid Crisis
Peter Clark, S.J., Ph.D., Professor and Director of Clinical Bioethics and student members of the Opioid Task Force will be on hand to answer questions about the epidemic sweeping the nation.

Dennis Comey, S.J. was a labor arbitrator of Philadelphia dock disputes during the 1950s and founder of the Institute of Industrial Relations (later Comey Institute) at Saint Joseph’s College (University). View original materials from the Archives related to Fr. Comey and ask questions of former Institute director John Lavin.

In addition, there will be many unique objects, textiles, documents and photos from the university’s collection.

Recently, staff of Drexel Library have organized materials relating to Bernard R. Hubbard, S.J., affectionately known as “The Glacier Priest.” The digital exhibit  contains photographs, maps and articles as well as links to fascinating information on the Arctic at that time.

Also on display in Drexel Library are photographs and ephemera relating to Hubbard and his visits to Saint Joseph’s University during the 1930’s-1950’s.  The exhibit, located on the second floor at the end of the main staircase, runs September – October, 2019.

The Reverend Bernard R. Hubbard, S.J. (1888-1962), former Head of the Department of Geology at the University of Santa Clara, California, was a celebrated explorer who studied geology, volcanology, ichthyology, oceanography and paleontology.  In later expeditions he shifted his focus to the study and documentation the Arctic people and their way of life.

His nickname, “Der Gletscher Pfarrer” (“the Glacier Priest”), was earned while studying theology in Austria and spending time in the Austrian Alps. From 1927 to 1962 he led over thirty scientific expeditions into regions of Alaska and the Arctic.

Take a few minutes and acquaint yourself with this fascinating man. Come to the Open House in the Archives and Special Collections on October 24th from 11 am to 1 pm and browse the display case while you are in the building! 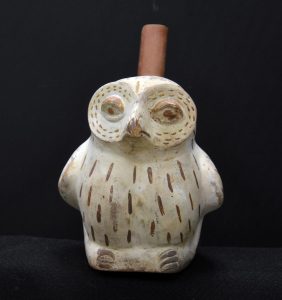 If you have been to the Special Collections on the 3rd floor of the Post Learning Commons lately, you may have noticed some pottery on display. Glancing briefly at these items, it would seem they are quite old. In fact, these objects pre-date Christopher Columbus’ voyage to the Americas in 1492. Hence, they are classified as “pre-Columbian.”

This exhibit of pre-Columbian pottery will be up through the end of the spring semester. Stop by and spend a few minutes contemplating these works. 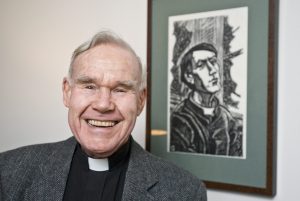 An internationally renowned Hopkins scholar and Emeritus Professor of English at Saint Joseph’s University, Joseph J. Feeney, S.J. is a lively and engaging speaker. Please join us as he presents “A Love Letter to Gerard Manley Hopkins, Jesuit Poet: On the Centennial of His First Book of Poems”

Gerard Manley Hopkins, S.J. was a little-known English priest and poet during the latter part of the 19th Century.  It was not until 1918, almost 30 years after Hopkins’ death, that his friend, Robert Bridges, Poet Laureate of the United Kingdom, compiled and edited the first collection of his poems.  Since that time, Hopkins has been recognized as one of the major poets of the Victorian Era.  Today, his poems, such as, “The Wreck of the Deutschland,” “The Windhover,” and “God’s Grandeur” are printed in numerous languages and enjoyed around the world.

To compliment Father Feeney’s personal insights into Hopkins’ poetry, two first edition copies of  The Poems of Gerard Manley Hopkins will be on view before and after the presentation.  Saint Joseph’s University is privileged to own four copies from the limited printing of 700.  The volumes are housed permanently in the Gerard Manley Hopkins, S.J. Specials Collections located in the Post Learning Commons.

This program is co-sponsored by SJU Library, the Jesuit community, and the Department of English. 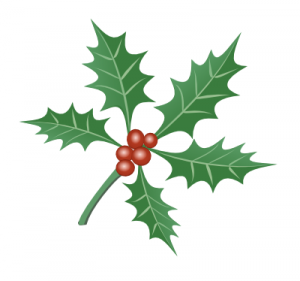 If you missed coming in the Library a couple days last week, you were in for a treat by Friday’s end! Library staff and Grounds Crew were busy sorting, attaching, and decorating the various Christmas trees throughout the building. Do the lights match? Are the ornaments in the right places?

Several iterations of manger scenes appeared on Friday as well. There is one hanging at the Main Service Desk. Another is sprawled out across the top of the Atlas Case. This one has a starry backdrop and some twinkly lights.

There is a very special Christmas creche in front of the live evergreens in the Post Learning Commons Atrium. From the University Collection, it was created in the 20th century, but fashioned after the 18th century Neapolitan style. The particular figures of Mary and Joseph, the materials used to create them, as well as the coloring of their garments, is unique to this style.

Next time you are walking through the Atrium, take a few minutes to contemplate this exhibit, not only for its spiritual significance, but also for the fine craftsmanship that was employed. You will also find there a pamphlet with more information, put together by Carmen Croce, SJU Scholarly Press.

As part of American Archives Mont

Notable pieces from our collections will be on view including a copy of the 1918 edition of Hopkins’ poems, rare books from our Jesuitica collection, and the marriage record from Old Saint Joseph’s Church for Francis A. Drexel and Emma Bouvier that was signed by Father Barbelin. Fr. Feeney and Carmen Croce, two esteemed colleagues, plan to join us.

You can search SJU Online for photos and objects of interest while visiting.

Light refreshments will be served. Please join us in celebrating our heritage and collections! 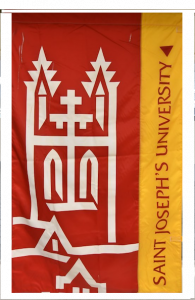 The Archives and Special Collections has created SJU Collections Online  to make information about the University’s collections more accessible to students, faculty, staff researchers and the public.  The database  contains records for institutional photographs, collected memorabilia and rare books.  More materials will be added on a regular basis.

Take few moments to browse through the virtual collection and learn something new about Saint Joseph’s University’s rich history.  For research assistance, or to consult the physical materials represented in the database, email Archives and Special Collections staff (archives@sju.edu) to make an appointment.