In Spring 2017, Saint Joseph’s University offered “Directed Projects” for the first time. It was a “trial of sorts,” according to Professor Susan Fenton, and the plan was to have students complete three independent projects. However, after the art curator of the Cynwyd Trail Café asked Professor Fenton if she would be interested in showcasing her students’ work at the café in May of 2107, the Cynwyd Trail project was added to the list.

The Cynwyd trail is a paved path where people can bike, walk, rollerblade and hike. The trail runs from Bala Cynwyd to Manayunk and was once an active train track. At the end of the path sits the Cynwyd Trail Café, which was formerly the old station house. Fenton was excited about the opportunity to exhibit her students’ work in the café, but thought why not make the theme of the exhibit about the Cynwyd Trail? Professor Fenton had her students go out to the trail the first time without their cameras to explore and just take in the scenery.  The second time, they returned with project ideas and their cameras. 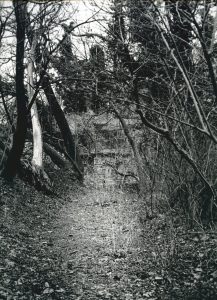 The students were able to choose from two types of photographic techniques.  Gelatin Silver Printing, introduced in the 1870s, is the standard of all printing processes in which paper is coated with gelatin that contains light sensitive silver salts. This typically involves a photograph captured on film that is then processed and printed onto a light-sensitive emulsion paper in a darkroom. This is the more “traditional” method of fine art photography.  Archival Pigment Printing, introduced in the late 20th century, is a standard of printing that involves digital technology. Typically, the image is captured with a sensor (digital camera) and then printed with an inkjet process that involves inks jettisoned onto the surface of a non-light sensitive, porous paper. This is a more recent method of fine art photography.

According to Angelynn Rodriguez, her silver gelatin print, “Westminster,” reflected her particularly “creepy” style of photography.  “Westminster” highlights what she thinks to be a gate keeper’s quarters or possibly a chapel called Westminster. Angelynn found this abandoned, brick stone Victorian at the end of nature path branching off the Cynwyd trail. She found the building particularly inspiring because one wouldn’t know the building was there at first sight because “you have to actually follow the same foot path that I took in the photo.” Angelynn used a burning and dodging technique when printing to bring out the details of the trail she walked along. 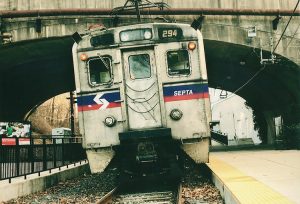 ontributed to the project with his archival pigment piece, “294.” “I spent time walking along the Cynwyd trail, photographing everything which could represent the Cynwyd trail. I learned to be patient, you have to look around carefully to get what you want. It was a good experience and I really enjoyed this project.” “294” was the number of the train he photographed. He explained, “I just wanted people to have their attention on the train” to focus on how the trail used to exist.  Although Xiao loved the process, he struggled with achieving the correct color composition when printing.  After several adjustments in Photoshop he was able to obtain a final print that mirrored the colors on the screen.

Professor Fenton believes the project, and Directed Projects in general, was a success. Although the class was intended to carry out independent projects, the “Cynwyd Trail” brought the class together, while still maintaining independent aspects.

**These two photographs are just a sampling of what is being displayed. Please allow time from your busy schedule to “walk the trail” through the photographs.**