As part of American Archives Mont

Notable pieces from our collections will be on view including a copy of the 1918 edition of Hopkins’ poems, rare books from our Jesuitica collection, and the marriage record from Old Saint Joseph’s Church for Francis A. Drexel and Emma Bouvier that was signed by Father Barbelin. Fr. Feeney and Carmen Croce, two esteemed colleagues, plan to join us.

You can search SJU Online for photos and objects of interest while visiting.

Light refreshments will be served. Please join us in celebrating our heritage and collections! 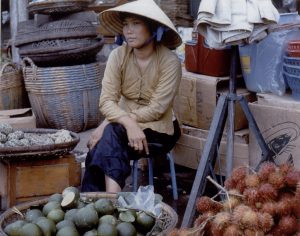 One of the elements making up the Glimpses: St. Joseph’s College During the Vietnam War Exhibit are an assortment of photographs titled, “Vietnam in Retrospect: Photographs 1969-1970.”

United States Army sergeant Richard Zanoni ’67 used his new hobby of photography to record daily life in Can Tho on the Mekong River Delta of South Vietnam during his tour of duty. Some of his 35 mm film images captured a different side of the war, than what many Americans saw back home on television, with children at play, a barber cutting hair, a woman selling her goods in the marketplace and Buddhist monks. However, others remind you that the war was ever present. One shows a smiling Vietnamese boy carrying his younger brother, who had lost his leg and another, a little girl eating rice from a discarded beer can. What happened to the people in his photographs is something that Sergeant Zanoni has often thought about since the war.