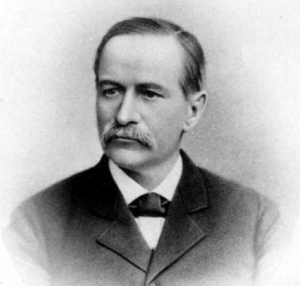 Francis Anthony Drexel was born in Philadelphia on June 20, 1824. He was the eldest son of Francis Martin Drexel, an Austrian artist and musician, and Catherine Hookey Drexel.

F.M. Drexel supported his family for many years as a Philadelphia portrait painter and traveling artist in South America before becoming an exchange broker in 1837. As the business flourished, he brought his sons Francis Anthony, Anthony Joseph, and later Joseph William into the firm. A partnership with his sons under the name of Drexel & Company was formed in 1847. The banking house would play an important role in the economic development of the United States from the Mexican-American War and California Gold Rush to the Civil War and the subsequent industrial revolution in the later half of the 19th Century. Drexel & Co. was also active on the world stage with financial connections to Drexel, Morgan & Company of New York and Drexel, Harjes & Co. of Paris. With the death of F.M. Drexel in 1863, the older brother Francis preferred that his younger brother Anthony become the directing head of the company.

Francis Anthony Drexel married Hannah J. Langstroth in 1854. She gave birth to daughters Elizabeth Langstroth in 1855 and Katharine Mary in 1858. Hannah died shortly after the birth of her second child. Francis gave the care of his two young daughters over to his brother Anthony and wife Ellen until marrying Emma Bouvier in 1860. Together Francis and Emma had a daughter Louise Bouvier in 1863.

As a family, the F.A. Drexels were very philanthropic, donating to numerous local hospitals, asylums, orphanages, and other institutions that assisted the poor and pensioners. When Francis died in 1885, two years after his second wife, he bequeathed 10% of his $15,000,000 estate to charitable organizations. Saint Joseph's College was one of those institutions. The rest of his estate was left in trust for his daughters. Katharine would later use much of the income from her inheritance to found the Sisters of the Blessed Sacrament and was recognized as a saint in the Catholic Church in October of 2000. Elizabeth and Louise went on to establish the Saint Francis Industrial School in Eddington, Pennsylvania and create the Francis A. Drexel Chair in Moral Theology at the Catholic University of America in Washington, D.C.

Under the terms of Francis A. Drexel's will his daughters were entitled to lifetime income from the trust he created for them. Katharine, the last surviving sister, died in 1955. Since there were no direct heirs, the trust was terminated and the remaining $14,000,000 in assets were divided amongst the original charities named in Drexel's will.

The Francis A. Drexel Library was named in the mid 1960s to honor F. A. Drexel for his benevolence toward the early College.

Further Readings in the Drexel Library

The Golden Door: The Life of Katharine Drexel by Katherine Burton
BX4705.D755 B8

The Francis A. Drexel Family by Sister Dolores
Archives CS71.D7685