Having spent the last 10 summers traveling through arctic regions, Pickarski discovered a deep love for the eternal beauty of icebergs. He finds them to appear sculpturally magnificent, as if crafted in a way that seems too perfect for this world. In this series of photographs, he aims to portray both the ethereal beauty of icebergs, as well as the otherworldliness of the landscapes in which they exist. 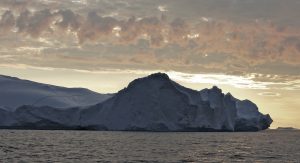 Thomas Pickarski has been traveling to “the iceberg capital of the world” on the west coast of Greenland for approximately ten years.  While traveling back to the US from Iceland in 2008, Pickarski caught his first glimpse of an iceberg from 30,000 feet.

“My plane flew over Greenland.  I was mesmerized by the sights!  My next thought was, ‘Someday I’ll go there.’  As I sat with that for a few minutes, I realized the dullness of having just jammed an enormous amount of time between myself and what felt like an urgent calling…Today, I can’t imagine a summer going by without my visiting the ice,” said Pickarski.

Pickarski has always been amazed by “abstracted and unusual shapes in nature.”  He finds these shapes not only in icebergs but also in the jagged and smooth arctic deserts in the volcanic island of Iceland and in the alluvial fans of the Atacama Desert of Northern Chile.  Pickarski has been able to see all of these forms in nature because of his month-long travels all around the world.  He says that he has “discovered that being out of (his) element, is (his) element”.  When asked to elaborate on this and on other things he has discovered about himself through his travels, he says that he has had to confront unfamiliar situations due to being placed in environments and cultures that are very different from his own.

“It appears the confrontation is with situations, but it is ultimately with myself, and my limitations and fears.  Going through the confrontation, I come out on the other side with the realization that my interior coordinates have been shifted.  The lines inside me have moved, and my capacity has expanded.  It feels like nothing, and everything, at the same time.  This is the part of traveling I look forward to the most.”

Icebergs have become Pickarski’s signature form since first traveling to the west coast of Greenland, the largest ice fjord in the Northern Hemisphere.  He now travels there every year in late August to photograph the icebergs found there.  He takes most of the photographs from boats or the hillsides surrounding the ice fjord.  He especially enjoys photographing during “the blue hour,” which he defines as “the hour after sunset, and just before darkness, when the ice takes on deep blue tones.”  Pickarski believes that the icebergs are at their best in terms of color in the absence of bright light.  The absence of the sun’s light allows the lines on the icebergs to become more present, casting varying degrees of intense blue shadows across the ice.  These details allow the iceberg to become the focal point of the picture, standing alone against a cloud, ocean, and ice backdrop.

Pickarski edits the photos with Aperture, a basic but now obsolete software.  He explained that he was trained in classic darkroom and chooses to do as little editing as possible.  He said, “using very basic software keeps me focused on maintaining a purity to both my intention as well as the image.”

The pieces included in “Floating Blue” were chosen by how they related to the blue theme of the body of work.  Pickarski’s favorites are the final few in the collection.  They were all taken on the same night, in the same final moments of “The Blue Hour”.  One has an unusual hint of violet, while the last image truly moves Pickarski.

“This iceberg sits alone, further away from the cluster.  It has dislodged from the bottom of the fjord and has begun to move.  As the boat is pulling me away, we see a vast spaciousness around the iceberg as it floats into the darkness, beginning its journey to the sea.”

The “Floating Blue” series transports the viewer to a place of stillness and calm.  You feel as though you are there, looking at the icebergs from yards away, in the final moments of the day before the sunlight completely disappears.  The blue shadows on the icebergs warn of the coming night but the lines, cracks, jagged edges, and dips in the ice hold your attention and make your eye follow each detail, making the viewer forget about all else.  The photographs command your attention and there is something new to be found in each one every time they are gazed upon.  They illustrate to us a world untouched by human hands, that stands alone against the test of time. 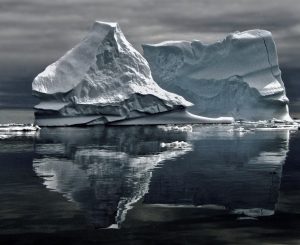