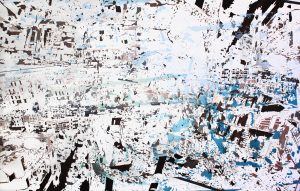 Getting Here From There

New York artist Ben Schwab grapples with the theme of “getting here from there” in his collection of cityscape paintings. In this gallery, viewers witness how Schwab’s work questions what he calls our “natural tendencies” as he tries to “make the unobservable, or unseen, more visible.” At first glance, each image appears to be bordering abstraction.  However, the negative space alongside minimal use of color compels the viewer to take a closer look at the details that reveal deteriorating cites such as Damascus and Aleppo.

Getting Here From There is inspired by Schwab’s interest in video footage collected by drones. Schwab’s “honest sense of curiosity,” as he calls it, motivates him to incorporate images of decaying cities into large scale paintings. In his artistic process, Schwab manipulates and layers multiple screenshots through Photoshop to create one image. Further, the spaces that Schwab works with might appear to be equally familiar as they are unfamiliar to some viewers. Rather than presenting a single perspective in his paintings, Schwab forces viewers to step out of their comfort zones and look at spaces they most likely haven’t seen before. As a result, the nature of “getting here from there” ultimately encourages viewers to strengthen their ability to connect with a place when presented with an image depicting an unfamiliar space. 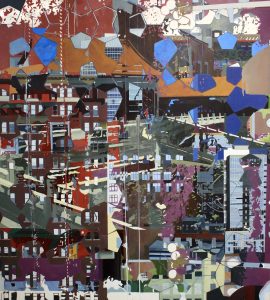